skip to main | skip to sidebar

The Outcome for the History Fair 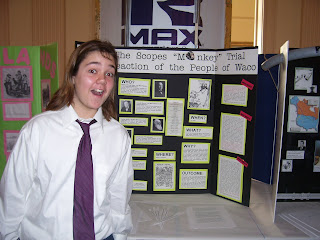 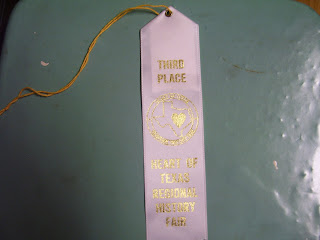 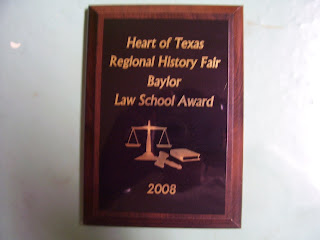 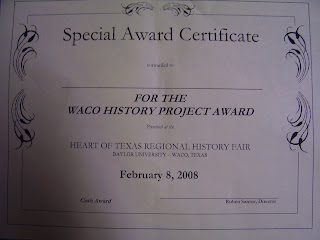 I placed Third place in Reginals, along with a Baylor Law School award, and a Waco History Progect Award (plus a cash reward!)

I think i did very well.

I will post a new poll on how you think i should have done on the History Fair.

I was absolutely clueless as to picking a topic for history fair. So, I looked around for people to help me. I found one lady who was especially helpful. She and I talked about my favorite subjects. I really like science, math and video games. She said there have been many conflicts in the area of science. We discussed some of them and she mentioned the Scopes Trial. I remembered I had watched a “Brain Pop” on the Scopes Trial and I thought it was very interesting. I told her I liked the Scopes Trial idea. The lady said that a good idea is to take a national subject and being it down to a local level. My mom said I should take her advice because she had written some local history books. Mom had read one and said it was very good. I slept on this information and took that lady’s advice so my topic is “The Scopes “Monkey” Trial and the Reaction of the People of Waco, Texas.”

First, I got on the internet and looked at many secondary sources about the Scopes Trial. I read biographies about the important people. I studied timelines. I went to the public library and checked out books to read for background, I went to the video store and bought a dramatized version of the trial called ‘Inherit the Wind’ which I watched. I also looked up old newspapers on microfiche at the public library. I read the main headlines and stories from Dayton. But, my main focus was on the local editorials and views.

I chose to do a display board. First, I chose the display board because I am very visual and like to have everything laid out. I’ve done display boards and I enjoy making them. I also made a blog not for the competition because I enjoy modern technology and consider myself good at it. Go to www.scopesmonkeytrial.blogspot.com. Besides posting the information from the display board in the site, I also have some polls, and places to write your own opinion.

“Conflicts and Compromises” relates to the Scopes Trial because of the conflict between creationism and evolution and what is the correct form of teaching. Another cool part about this is that the conflict still goes on. People are still debating whether to include creationism or evolution in science class today.
Posted by Kenz at 5:59 PM No comments:

“William Jennings Bryan has his new paramount issue for the campaign of 1928. … That is, until the craze has died out. Every few years a craze of some sort overwhelms the democratic donkey and the donkey butts in. It is different with the republican elephant. He walks around a stump and lands at his stable door without injury. ... Pat Morris Neff, in a recent epistle begged for a place far removed from the maddening crowd, far from the politicians and political discussions.”
Waco News Tribune, editorial, July 11, 1925

“This is a merry old world. It has jogged along for millions of years. It will continue along regardless of the evolutionists or the anti-evolutionists...”
Waco News Tribune, editorial, July 11, 1925

“If education be a state function, then it would seem to logically follow that the state can prescribe and proscribe as it may elect. Being master of the situation, the state can either introduce or exclude the Bible, and that the same applies to evolution and all other subjects. What the state does may be foolish, but who shall say what it can or can not do, so long as it does not violate any provision of the Bill of Rights? If the state sees proper to “put bonds to all human knowledge” who shall see it nay, dealing here, of course with public education, which is under state control?
The state may make itself ridiculous, but isn’t that the states affair? ”
Waco Times Herald, editorial, July 10, 1925

“The Kansas City Star sent one of its best men out to Dayton to report on what he might see and hear. It interests us to know that the Rev. T.T. Martin in the Baptist church there last Sunday morning. The Star man calls him “Brother Martin,” and a lot of us called him that same when he lived here in Texas. Our good friend, Sam Rayburn, was the singer for Brother Martin in his evangelistic work for many years. The Star man tells us that “Brother Martin” advised his hearers to remain calm, which he wasn’t, by the way, adding; “By remaining calm, which he insisted with growing excitement was a perfectly easy thing to do, the people of Dayton would defeat Mr. Darrow’s design, which was to get sympathy and support to himself.” All the circumstances considered, we think it only natural that Brother Martin was just a bit excited; it is doubtful if even Calvin Coolidge could have gone into the Dayton atmosphere without displaying a bit of perturbation.”
Waco Times Herald, editorial, July 24, 1925

“The secrets of Nature do not belong exclusively to those who call themselves scientists, nor yet do the secrets of God belong exclusively to those who call themselves theologians; the point at interest is that revelation is taking place all the while- that God is constantly revealing himself through Nature and through the operations of the Spirit, and nowhere is there conflict of authority- God cannot contradict Himself.
Waco Times Herald, editorial, July 22, 1925

“The jury at Dayton is not called upon to decide whether Darwin or the Bible is right. The jury is called upon to decide whether or not one Scopes has violated a law of the state of Tennessee. If Scopes be declared guilty, then the case will go to the supreme court of Tennessee to test the constitutionality of the law. If the supreme court of Tennessee upholds the law, then the case, if there be any chance therefor (sic) will go to the supreme court of the United States and if the august tribunal holds that the law does violence to the Constitution of the United States, then the law is dead and Scopes goes free; otherwise, Scopes pays his fine and the law against the teaching of evolution in the public schools of Tennessee stands until it shall be repealed by the legislature of that State. The law applies only to the public schools; any private school can teach evolution in Tennessee, and so can press and pulpit and plitform (sic) if they so elect. The jury at Dayton has nothing in the world to do with any conflict between the Bible and the Darwinian theory. The only question before the jury is, Has the law been violated?”
Waco Times Herald, editorial, July 24, 1925
Posted by Kenz at 7:39 PM 1 comment:

“Question Before Dayton Jury”. Editorial from the Waco News Tribune. July 21, 1925.
The microfiche provided an actual copy of the paper.

“No Conflict in Authority” Editorial from the Waco News Tribune. July 22, 1925.
The paper was preaching on the Sunday and I felt that this was going to change due to the Scopes trial.

“Brother Martin at Dayton”. Editorial from the Waco News Tribune. July 24, 1925.
A famous preacher comes to preach at Dayton the day before the trial.

“Development Is Not Evolution” Editorial from the Waco News Tribune. July 23, 1925.
The article sates how missionaries to Africa take certain animals with them that represent evolution, and the editorial is contradicting that saying that “development is not evolution”.

History Corporative. 8 Nov. 2007
www.historycooperative.org/journals/jah/90.3/images/moran_fig.gif
The cartoon was drawn at the time of the trial and it showed monkeys asking each other if they were really ascendants of the humans who were hanging a person.

“The Premonition Would get more Votes if the Monkeys could be in it” cartoon. 8 Nov. 2007
It showed monkeys voting on whether they were related to man.


“Darrow on Evolution” Editorial from the Waco News Tribune. July 4, 1925.
The article was about Darrow’s views on evolution.

“Teaching in Tennessee” Editorial from the Waco News Tribune. July 5, 1925.
The article was talking about how teaching would change due to the Scopes Trial.
Secondary Sources:

The Scopes Trial; Cornerstones of Freedom. New York: Children’s Press, 2003
A description of the ’25 Scopes Trail.

The Evolution- Creationism Controversy: A Chronology. 23 Sep. 2007
www.law.umkc.edu/faculty/projects/ftrials/scopes/scopeschrono.html A detailed timeline about the world leading up to the Scopes Trial.

“Inherent the Wind.” Spencer Tracy, Fredric March, Gene Kelly.
Metro Golden Mayer, 1960.
This movie provides a dramatized performance of the Scopes trial and the events leading up to it

“Should Children Be Exposed To The Facts?” September 23, 2007
www.law.umkc.edu/faculty/projects/ftrials/scopes/onionOpinion.htm
The document is satire writing about if children should be exposed to the teaching of evolution.

George Rappalyea September 23, 2007 www.law.umkc.edu/faculty/projects/ftrials/scopes/SCO_RAPP.HTM
The site provided a biography of George Rappalyea, a fundamentalist preacher at the time of the trial.

“The Scopes Trial: What was it Really All About?” November 15, 2007
http://www.bradburyac.mistral.co.uk/tennesse.html
The site’s main question was ‘what was the trial really about’.

“The Scopes Trial” November 15, 2007
http://en.wikipedia.org/wiki/Scopes_Trial
The site provided a biography for Scopes, an overview of the trial, and what the trial was trying to achieve.

“The Textbook” November 15, 2007
http://ehistory.osu.edu/osu/mmh/clash/Scopes/Documents/Textbook.htm
The site showed exerts of the textbook (approved by the state of Tennessee) that Scopes read to the high school students and was convicted for.

“The State vs. John Scopes: The Monkey Trial” November 15, 2007
http://jurist.law.pitt.edu/trials1.htm
The site provided a single person’s view on the Scopes Trial and what the state what doing and thinking.

“The Monkey Trial” November 15, 2007
http://chnm.gmu.edu/courses/hist409/scopes.html
The site provided a word-for-word transcript of Darrow intervewing Bryan as a witness during the trial.

“75 years after the Scopes trial pitted science against religion, the debate goes on” November 16, 2007http://archives.cnn.com/2000/LAW/07/13/scopes.monkey.trial/
The site mainly focusus on religion and science instead of Scopes and the state.

“Evolutionism: Broad Strokes” November 16, 2007
http://www.allaboutphilosophy.org/evolutionism.htm
The site tells all about all different versions and all about them.
Posted by Kenz at 7:36 PM No comments:


1919
“Civic Biology” textbook is written. Contains a Section on Evolution. (Tennessee decides to use this textbook.)

1922
William Jennings Bryan (and other religious leaders) begin a campaign to ban the teaching of evolution in public schools.


May 4, 1925
The ACLU announces it wants to challenge the “Butler Act” and
is looking for
a test case.

May 5, 1925
Dayton, Tennessee town leaders, seeking a way to increase tourism, ask John Scopes to be the ACLU’s defendant. Scopes agrees and a warrant is issued for his arrest.

May 6, 1925
ACLU announces it will assist with Scopes defense

May 13, 1925
William Jennings Bryan volunteers to help the city of Dayton prosecute Scopes

July 20, 1925
Defense lawyer Clarence Darrow calls prosecutor William Jennings Bryan as a witness and questions him on the meaning of the Bible and the age of the earth.

Thank you for looking at my blog on the Scopes Monkey Trial, I hope you found it informative.

How do you think I should have placed at history fair?

Do YOU think that evolution should be tought in science classes today?

a cartoon drawn at the time of the trial